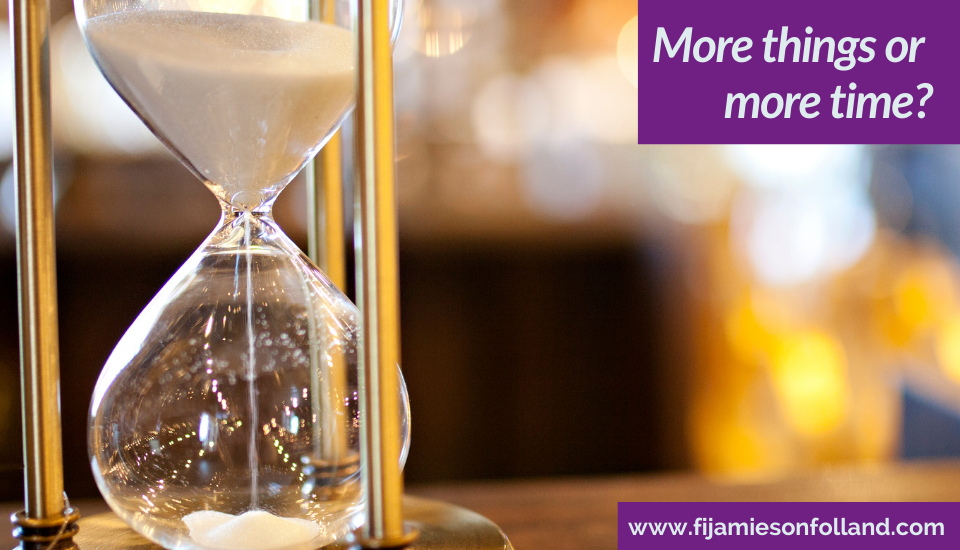 Welcome to this week’s hot topic.

So the big question is – more things or more time?

In other words, what’s the ultimate goal?

Is it to acquire a collection of things? Is it true that the more toys we have, the happier we are?

Or is it that we’re happier if we have more time?

Or is it a mixture of both?

I really focused on the early part of my life getting things together and I thought, “you know what? I’m going to enjoy my life more when I have this car or this house,” I thought when I bought that car, that would be the ultimate. When I bought a multi-million dollar home, I thought that’ll be when I’ve ‘arrived’.

Have you ever had that experience where you REALLY WANTED something and you got it and the enjoyment didn’t last?

So I started to really ponder on the thoughts that if people in Bali, Indonesia, where Fi and I have spent a lot of time, can have next to no money and be leading wonderfully enjoyable lives, (you can see they’re full of happiness, with huge smiles on their faces), then maybe there’s something in that.

I remember seeing a farmer in the rice paddy field, living in a tin shack – literally a tin shack on the side of a field. He doesn’t have a lot of things but he certainly seems to have enjoyment.

I’d always realised the wisdom in delayed gratification when it comes to making money. In the sense that I decided to do things today that people wouldn’t do, so that tomorrow I could do things that people would never be able do. So I delayed gratification by spending less money now so that in the future I could have more freedom, more life – more time.1

I don’t think that’s smart either because that’s where people spend the best part of their lives in the early parts by focusing on making money and the second halves of their lives spending that money to get their health back because they lost it in the process – and they didn’t enjoy it. They were resisting the process of enjoyment of life.

But there’s nothing wrong with going for things – I think that’s totally fine. Each of us have been given a dream of something we desire – and I believe that every dream we’ve been given, we can achieve.

We’re not given dreams for abstract reasons. There’s something in our heart that pulls us towards it. It’s about enjoying ourselves and the process of doing it.

I think that’s the key.

Have a fabulous week ahead, until we connect on this week’s #AlivewithFi 🙂

1 This ability to resist temptation and stick to our goals is often referred to as willpower or self-control, and delaying gratification is often seen as a central part of this behavior. We put off what we want now so that we can perhaps get something else, something better, later on.